Meta might soon want everyone to hop into its playful virtual realms, but some users are set up for a shock.

In the service of pushing people to socialize in Horizon Worlds, the virtual social network has voice chat enabled by default. As anyone — particularly any woman — who’s played an online multiplayer game in the last decade can attest, chatting over live audio with people you don’t know is often a harrowing experience, and one that opens the floodgates for harassment and hate.

Nonetheless, Meta’s virtual social world doesn’t disable the voice chat options off the bat, a strange decision for a company that’s bound to be at least a little self aware that its online platforms have, time and time again, been used to spread hate.

Now, the company is adding Voice Mode, a new set of controls for voice chat that will be rolling out in the coming weeks. Voice chat is inexplicably still enabled by default but will soon come with some more granular options that let users opt in to disable audio from nearby strangers. There’s also a new option to “garble” strangers’ voices, turning them into “unintelligible, friendly sounds” (basically Meta’s version of Simlish). 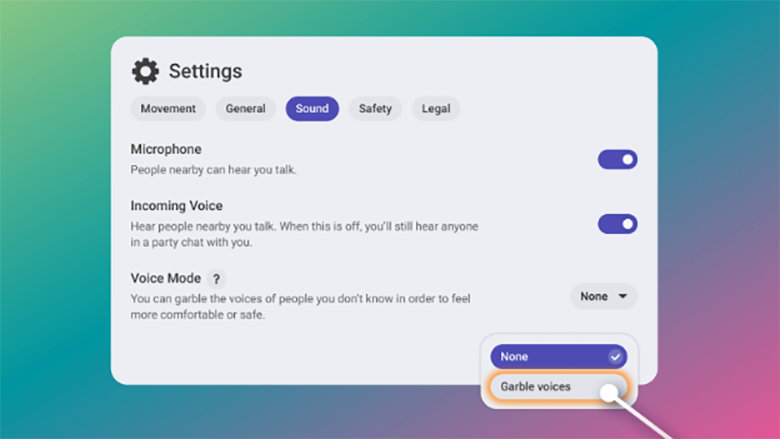 With garbled voices on, avatars around you will be able to see that you can’t hear them via a mic icon with a strikethrough. You can raise a hand to your ear to hear what they have to say without needing to add them to your friends’ list, but really… why would you?

In March, Meta introduced a feature called “personal boundary” to keep a small 4-foot buffer of space between avatars in Horizon Worlds. The option, which was presumably implemented to address obvious concerns about spatial social networks and sexual harassment, is on by default for strangers.

During a short onboarding sequence, the platform also tells users that they can activate a “safe zone” setting to mute or block users at any time. The onboarding touches on the safe zone settings and various motion controls, but quickly funnels you into an immersive live voice chat setting with total strangers and leaves it up to the user to make that space feel safe for them.

Horizon Worlds maximizes interaction by default, which is really sort of puzzling given the inherent risk of setting people loose on even more immersive social platforms without thoroughly thinking through all the ways things might go wrong. And Meta is already growing its core metaverse product, expanding to users in the UK this week.

On the one hand it’s good that Meta is adding new voice controls into Horizon Worlds just like it’s good that they added a small spatial buffer between avatars. But it’s impossible not to wonder why these voice chat options weren’t baked in from the beginning — and why Horizon Worlds doesn’t default to the safest, most private settings across the board.

Ultimately, it’s a telling sign that with Horizon Worlds, Meta is yet again building the plane as it flies. What that will mean for users and society as whole we’ll probably only learn once the virtual world is stuffed with passengers.