One of the challenges faced by people with Parkinson’s disease is the possibility of “freezing” during normal movement, causing falls and lack of mobility. Surprisingly, small external cues can help them escape freezes or avoid them altogether — and De Oro has raised $2.8 million to commercialize its NexStride portable gadget, which provides those cues on demand.

The simplest way to understand freezing is that the normal pathway in the brain for your body turning the impulse “walk forward” into actual movement doesn’t activate correctly. This can lead to slow or stopped movement despite willing one’s limbs to move the way they normally do.

Studies have found a surprisingly effective technique for preventing this: cueing. When a person sees or hears an external cue associated with moving forwards, it activates a different pathway for walking forwards, breaking the person out of the frozen state.

De Oro’s device provides two such cues. One is a little metronome-like ding that makes the brain think about moving in time with it rather than going step by step. The second is a laser-projected line just ahead of the user’s feet that seems to activate the idea of stepping over or past something rather than just “forward.”

The NexStride attaches to a walker or cane using a little stretchy loop like a bike headlight’s, with a corded controller that can be put somewhere convenient for the user. Hardware dials on the main unit let them control the volume and tempo of the metronome, and the position of the laser line.

There’s plenty of studies about the efficacy of this approach in the lab, and the company has polled its customers, finding a large majority were able to get around more confidently and with less fear. Clinicians they’ve worked with recommend the device to clients as well as a convenient catch-all way to improve mobility. 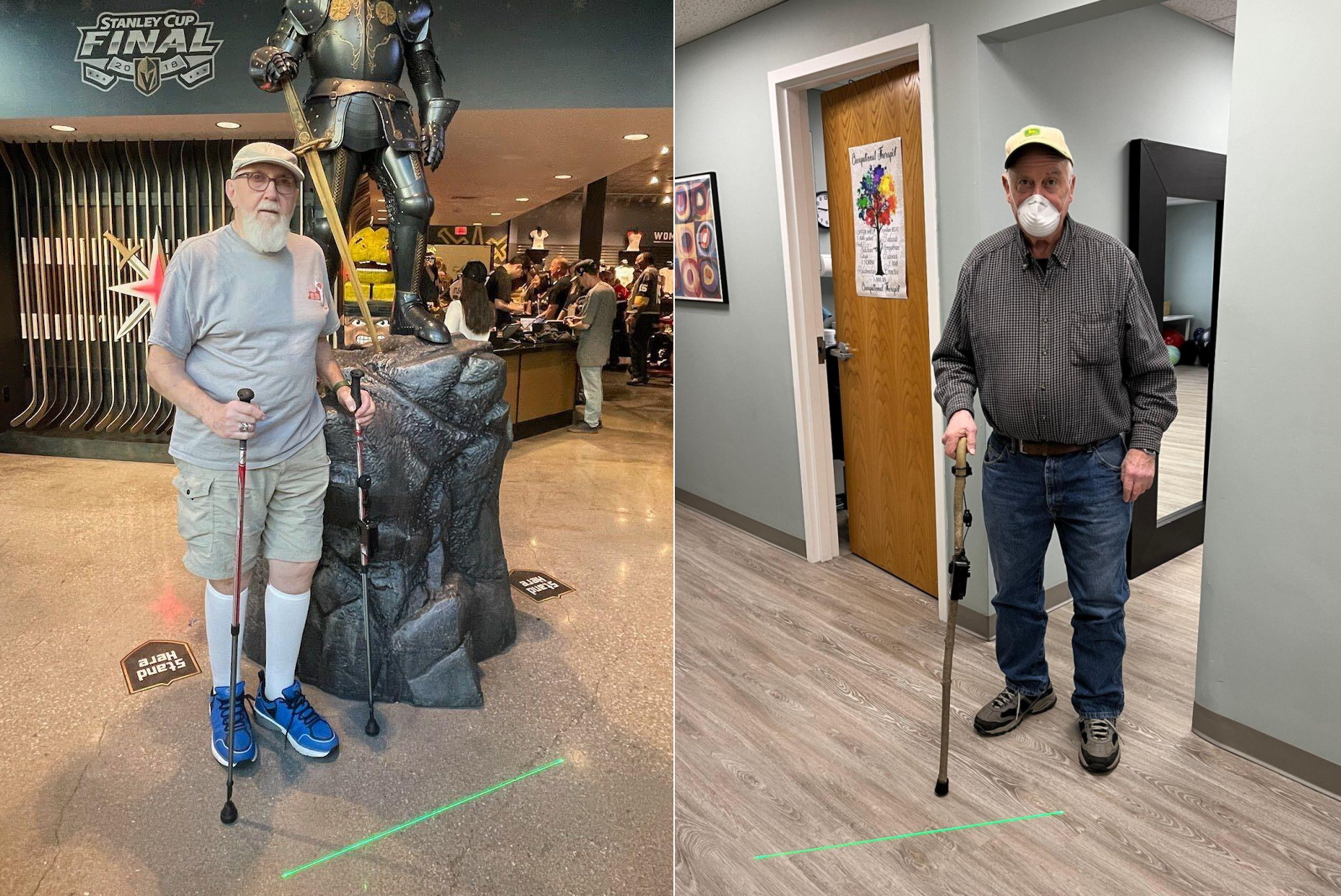 Walter and Richard both found the device very useful in getting around on their own terms.Image Credits: De Oro

There are a few items like this out there, like the U-Step laser and sound equipped walker. But the U-Step is built into the walker itself: a large and heavy item not particularly suited for use outside the home, and certainly not something a person with mobility issues could throw in the trunk. As is often the case with accessibility hardware, there’s a lot of legacy stuff from decades past.

The advantage of the NexStride is it’s self-contained and portable — people often have a favored cane or walker and the gadget can be attached to pretty much anything, and switched in a few minutes. “NexStride doesn’t make people compromise on choosing between their favorite mobility aid and having access to these effective visual and auditory cues,” said De Oro founder and CEO Sidney Collin.

Manual operation was a design choice prompted by feedback; users and clinicians recommended it over the automatic approach NexStride first attempted, which would presumably have turned on the laser or sound when the person stopped moving. Turns out people like to be in control — especially people for whom control is an everyday medical issue.

The only sticking point is the retail price: a somewhat eye-popping $500, not yet covered by insurance. While it’s not the most expensive medical or mobility device out there, it’s a little hard to reconcile the sticker price with the device itself, which although well designed doesn’t seem particularly exotic or expensive to build.

The company said that it priced the NexStride to be competitive with the other options out there, which it handily outperforms, while also keeping manufacturing in the U.S., which necessarily adds to the costs somewhat.

While full retail sounds like a lot, any veteran can get a NexStride for free from the VA, which is definitely a vote of confidence from an institution that serves a lot of people who need it. And the Parkinson’s Wellness Fund may cover from half to the full cost through grants.

With an aging population that’s healthy and mobile, devices like this may be escaping the likes of medical suppliers and becoming more of an ordinary consumer gadget. After all, Parkinson’s can affect people before even middle age, and you know that demographic will be doing a lot of comparison shopping.

The $2.8 million seed round, which will go towards scaling up De Oro’s operations and getting the device to more people, was led by True Wealth Ventures, with participation from AARP, StartUp Health, Capital Factory, Wai Mohala Ventures, Kachuwa Impact Fund, Barton Investments, HealthTech Capital, Wealthing VC Club, Rockies VC, and Mentors Fund. The company raised $1.5 million before this.

The funding and innovation here are a reminder that there are many frontiers on which to found a startup, and lots of less visible people and groups who stand to benefit from even ordinary-seeming advances in tech.